Georgia Bulldog fans around the country should give a great deal of thanks to several Laurens Countians  for Jake Fromm and the Bulldog's phenomenal season and an appearance in the National Championship game on Monday.

Jake Fromm, who has led the Bulldogs to within one victory and a NCAA National Championship, is a son of James E. Fromm and Julie Lee Haskins.

James Fromm,was once associated with Mid State Pools in Dublin and now operates a store in Warner Robins.  James is a son of Randall Fromm and Jennifer Cooper Fromm.  Jennifer is the daughter of Virgil and Saralyn Cooper, a contractor and banking secretary here in Dublin.  Jennifer Fromm is the niece of retired pharmacist, Mark Cooper at Oatt's Drugs.

After they were married in 1995, James and Lee lived in Dudley before moving to Warner Robins, where Jake was born and became one of the top high school quarterbacks in the country. 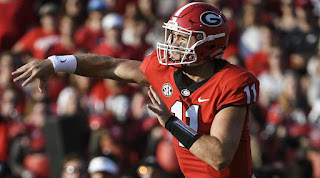 Whether, the Bulldogs defeat Alabama in Atlanta on Monday night or not, remember that the ability of the young freshman  who went a long way getting his team to the national championship game comes in a large part through the DNA

passed on to him by these fine Laurens and Johnson Countians.