PIECES OF OUR PAST - THE RACHEL'S CHICKEN FARM 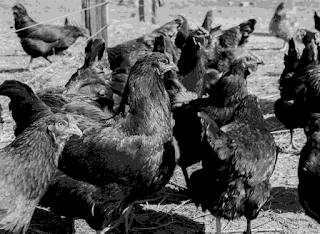 Laurens County farmers had to find something to replace the cotton crop which was rapidly being destroyed by the boll weevil.  The county was too dependent on "Georgia Snow".  Corn was still a large cash crop but couldn't take up the slack when cotton production plummeted.  Farmers stepped up livestock production.  More field crops were produced.  These included sweet potatoes, watermelons and grains.  Some farmers even tried strawberries, dewberries, and yes, paprika. One farmer had a good idea.  He knew what he could do with the proper equipment, land, and luck.

Julian A. Rachels enlisted the aid of his brother-in-law, Doyle C. Knight in beginning a new commercial farm business.  Between the two of the men, they had ten years experience in raising chickens.  Knight, a commercial photographer, was the business half of the team.  Rachels was the working half of the team.   Rachels and Knight named their farm, the "Riverside Poultry Farm."  Interestingly, the farm was three miles from the river.  It was originally one and a half miles from Dublin.  Today their farm is located in the southwestern section of the city.  It encompassed most of lands between Vernon and Belmont Streets and Erin Office Park.

Rachels began his operation on his 60 acre farm in 1920 with 500 white leghorns in his back yard.  Eventually the chickens were allowed to roam and forage over a 10 acre range.  Rachels was confident that his methods of raising chickens would be successful.  Farmers from all over were thrilled with the profits from Rachel's chicks.  J.C. Yopp bought 50 two month old chicks and within five months turned a profit of 600%.  Mr. Rachels cautioned the inexperienced and back yard chicken farmers to start out small with a few day old chicks.  An incubator was an absolute necessity.  In those days nearly every rural and many city homes had their own chicken coops.  The keys to a successful chicken operation were the use of only pure bred chickens and growing one's own feed.

Within two and a half years the operation began to take off.  Successful operations like this one were few and far between.  The trade area encompassed nearly a hundred thousand persons.  Two hundred Rhode Island Reds were added to the flock.  Rachels and Knight installed a series of incubators which allowed fresh chicks to be hatched on a weekly basis.  The total capacity of the incubators was fifty-six hundred.   These day old chicks, the best buy for the money, sold by the thousands - especially in the Spring.   So many chicks were sold that Rachels found his own stock depleted at times.  Rachels always picked the choice eggs and chicks to use for his own stock.  Experience and detailed record keeping was essential in maintaining the right stock.  Many of the best eggs were picked out and set aside for restaurants, hotels, and choicy buyers.  The high quality of the eggs brought premium prices over the average yard egg.  The best cockerels were selected and fattened up to produce number one fryers.

Out in the fields Rachels constructed a long line of breeding houses.  These houses were designed to accommodate the chickens during the hot summer months.  One side of the houses was completely open and the other closed to protect against the cold winds of winter.  In the center of the building was a two- story storage building for feed.  The chickens were fed a diet of oats and buttermilk mash.  The oats were grown on the farm and were fed fresh to the chickens most of the year round.  Local dairy farmers were unable to supply the farm with enough buttermilk, which had to be purchased in bulk and stored in barrels.

In 1922 the Riverside Farm produced over thirty three thousand chicks which had been raised after leaving the breeder houses.  That many and more were sold as day old chicks to amateur and back yard farmers in this section.  Rachel's success was so impressive that N.G. Bartlett, former Dublin Chamber of Commerce director, wrote an article in the "East Carolinian" a newspaper of agriculture and commerce.  Rachels was proud of the fact that he kept his operation big enough to pay its way and support his family.  At the same time, he was also proud that he kept it small enough for him and a few hands to manage.

Knight and Rachels had a simple four-step plan for a successful poultry farm.  First, one had to have the best pure bred poultry.  Second, the operator needed enough land for the chickens to roam, preferably in an peach orchard.  The peaches could also supplement the income and the chickens would fertilize the trees.  Third, there must be a farm land to grow the oats and grains for chicken feed.  The last step was the establishment of a small dairy operation to supply the buttermilk.

Julian Rachels operated his chicken farm for nearly five decades.  Rachels and his wife moved to the farm and built a home in the early 50s.  The operation was scaled back and the farm was subdivided into building lots which were near the County and VA hospitals. Julian Rachels, Sr. died on Independence Day in 1986. Several years ago the remaining farm buildings were razed and nearly all evidence of the farm is gone.  If you want to see where the farm was, go out Bellevue Road and turn left on Vernon Street.  Turn right on Kings Drive and go to the spot on the left where you see a small grove of bamboo.  The buildings were just beyond the grove behind the house of Clay Lord.