PIECES OF OUR PAST - THE MAGIC OF THE SHAMROCK BOWL

THE MAGIC OF THE SHAMROCK BOWL

Do you remember the magic of 1962?  Today it almost seems like a dream.  Teenagers had a carefree life, except when they were thinking about a date on Saturday night, getting enough gas money to "Scratch the Patch", or how they were going to pass Mrs. Powell's English test.  The conflict half way around the world was just beginning to erupt.  The "Lads from Liverpool" were planning their British invasion.   Uncle Jed and the Clampett family were moving to Beverly Hills.  The Cuban Missile Crisis was a month away.

Outsiders said "It couldn't be done.  There's too much factionalism in Dublin."   There had been a bitter dispute over whether or not to build a county hospital.  Laurens Countians had just gone through two heated election campaigns for Sheriff and Judge.  Any successful building project needs a leader and many more loyal supporters.  Don Lamb, a Dublin businessman, shook off all the doubts about our ability to complete the project.  The origin of the project went back to 1959 and 1960 when the Irish of Dublin High School won two consecutive state football championships.  Battle Field, which had been around about twenty years, was totally inadequate for the needs of the team - and especially the fans.  The bleachers had no aisles and once you got to your seat - if you could find one - you had to stay.  People stood along the rails near the gym and on top of the cars parked on Moore Street to watch the Irish play.  On some nights as many as six thousand fans would line the edges of the field. 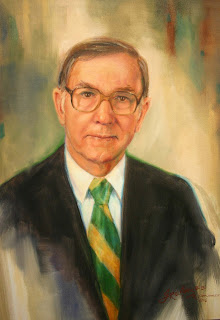 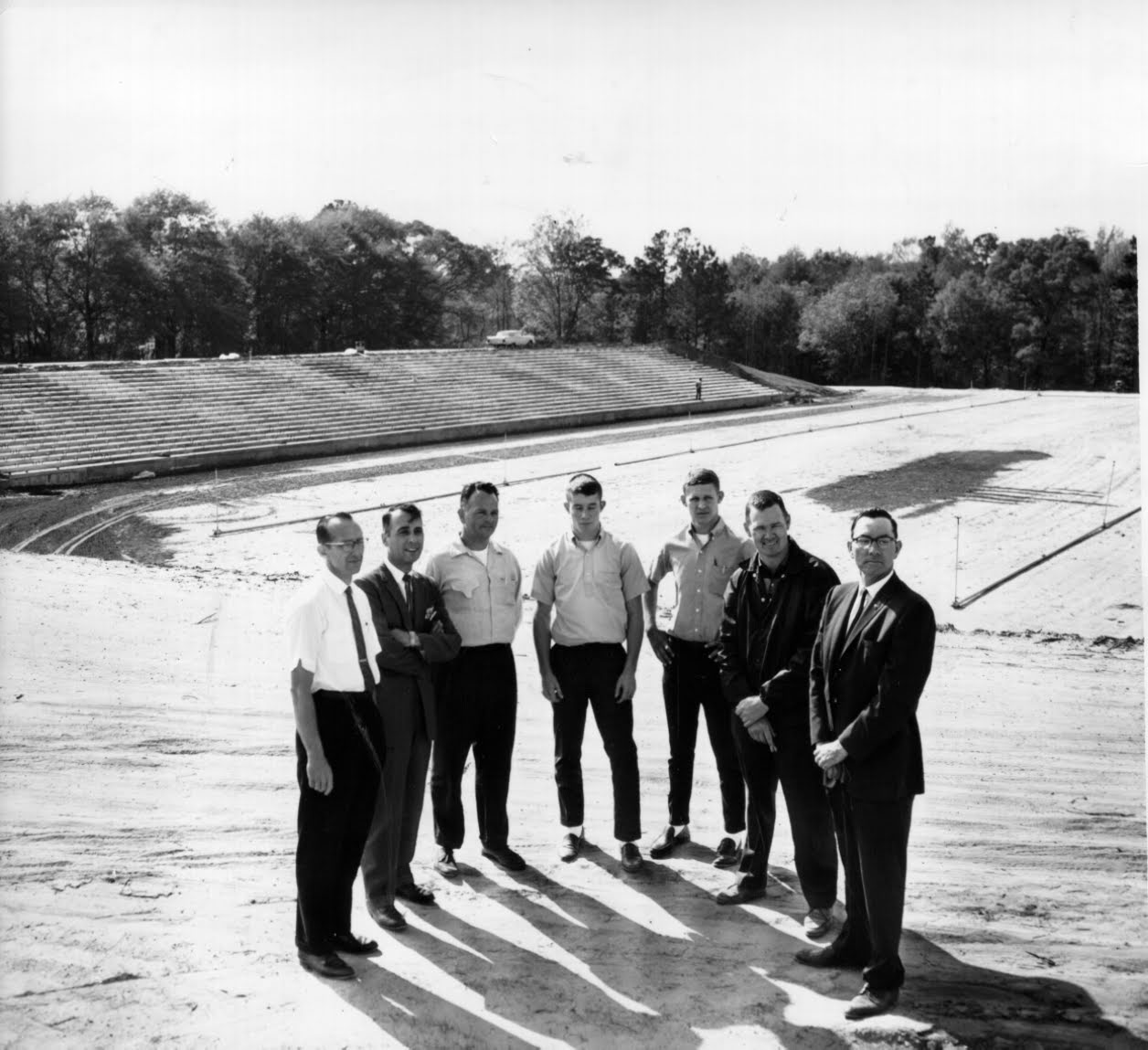 The fund raising drive began three days later.  The original goal was $50,000.  The final cost would be a little over $87,000.  Lamb and his board of directors came up with an ingenious plan to raise the money.  Each donor would be not be asked to give cash,  but to sign a promissory note, payable in 36 installments.  Real estate developer Thomas Curry remarked "It was the only time in my life that I borrowed money to give it away."  Within a week nearly sixteen thousand dollars had been pledged.  The notes were discounted by the local banks to provide the construction funds. 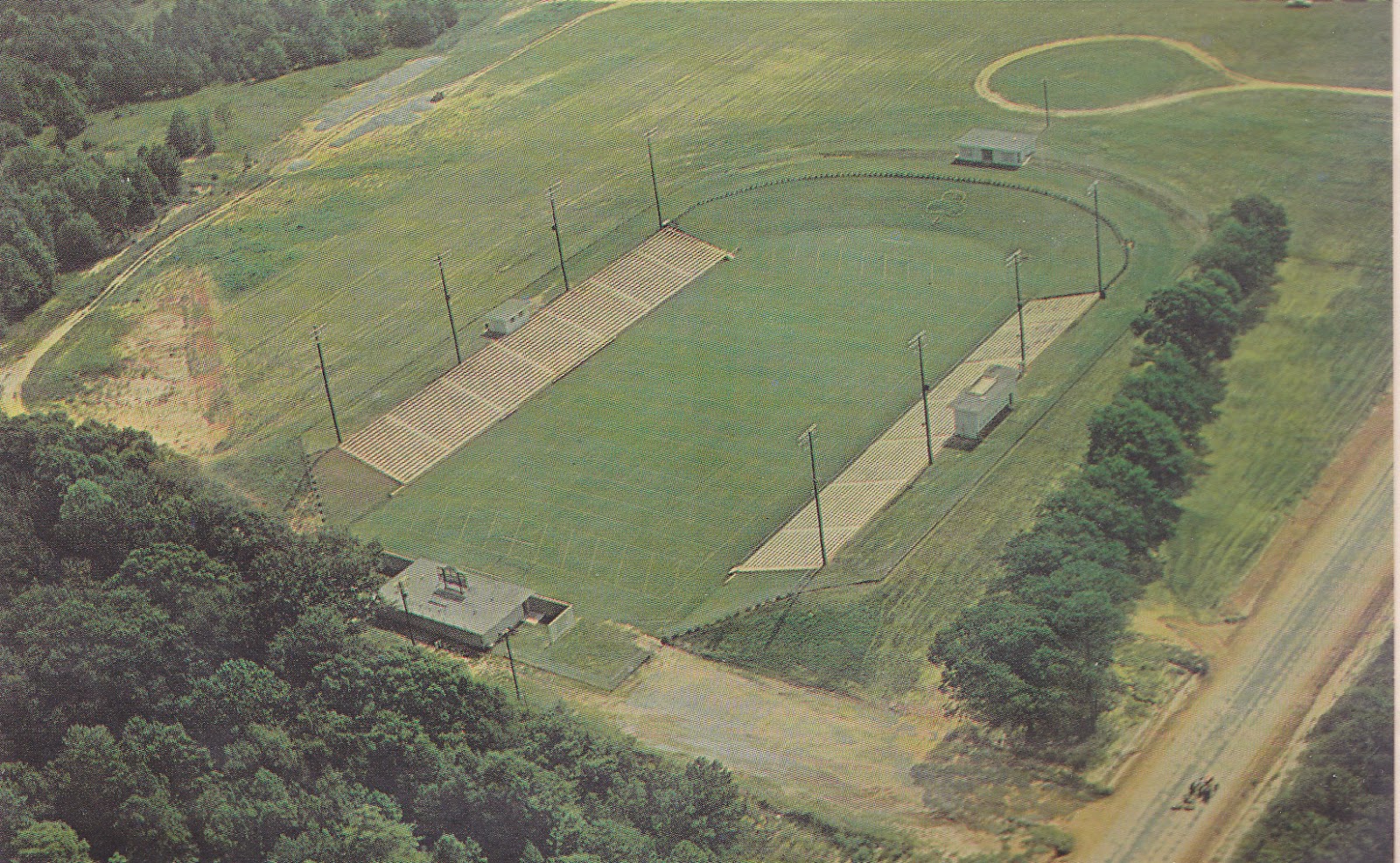 The new stadium, which was still unnamed, was designed by Spitler and Yates to seat 8,200 people - with room for future expansion.  There would be a modern field house, better restroom facilities, improved lighting, and better refreshment stands. The architects took advantage of the terrain and designed the stadium in a natural bowl shape which was opened on the north end of the field.    The city and county lent some of their equipment to grade the site and to build an access road to the stadium and one from the stadium which later became Brookwood Drive.  Sgt. Ben Snipes planted the grass.  Grady Wright gave his services as the landscaper. Willie Wilkes helped with grading.  Spec Hall groomed the field and planted the slopes.  Troy Manning lent his irrigation equipment to pump water out of the creek. Ben Hall of Dublin Construction, R.T. Grier of Durden Electric, A. E. Kimball of Harpe Plumbing, and Ed Taylor of Builders Concrete gave up their profits on the job.  Their were dozens of others who lent a hand. 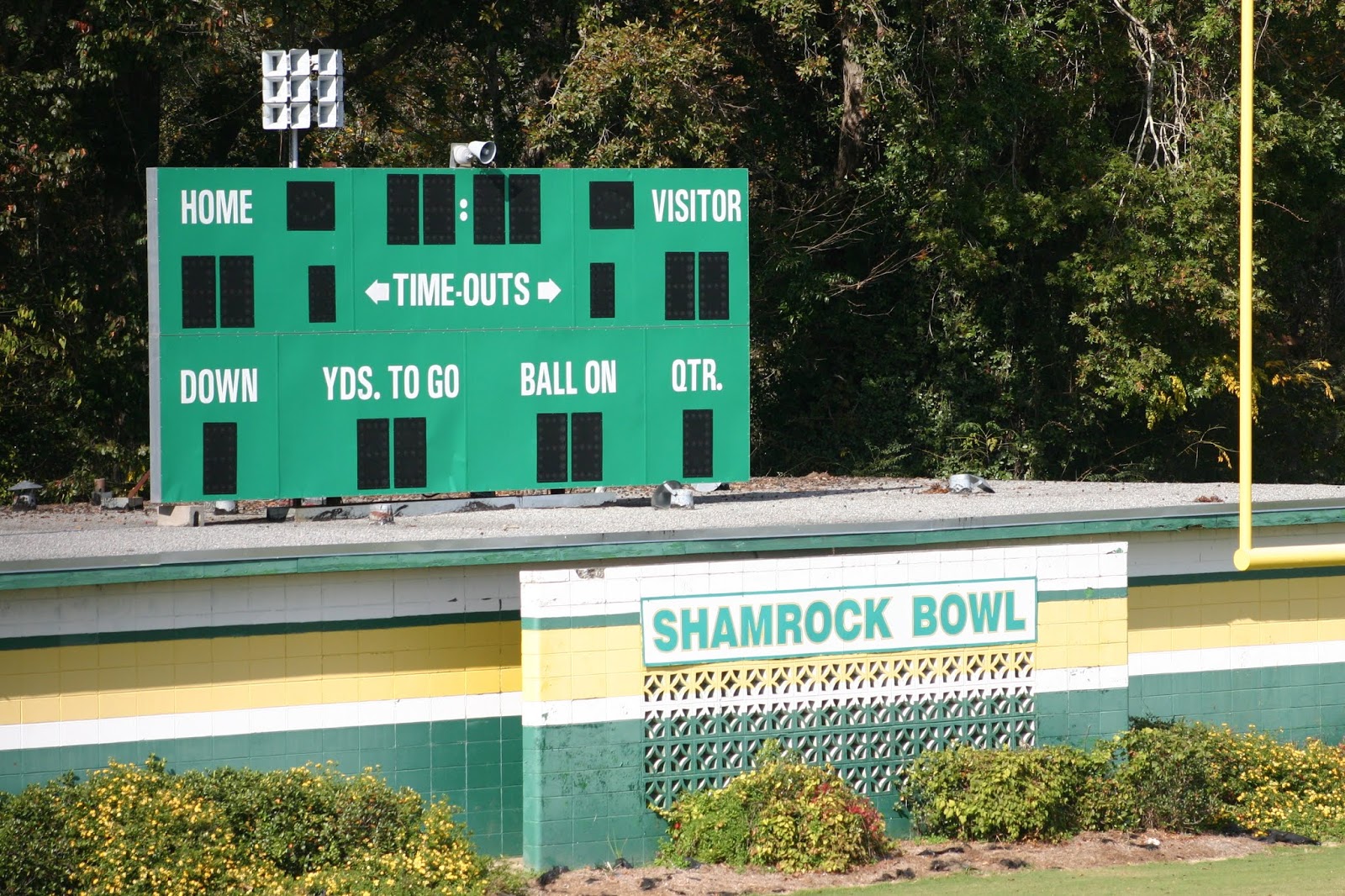 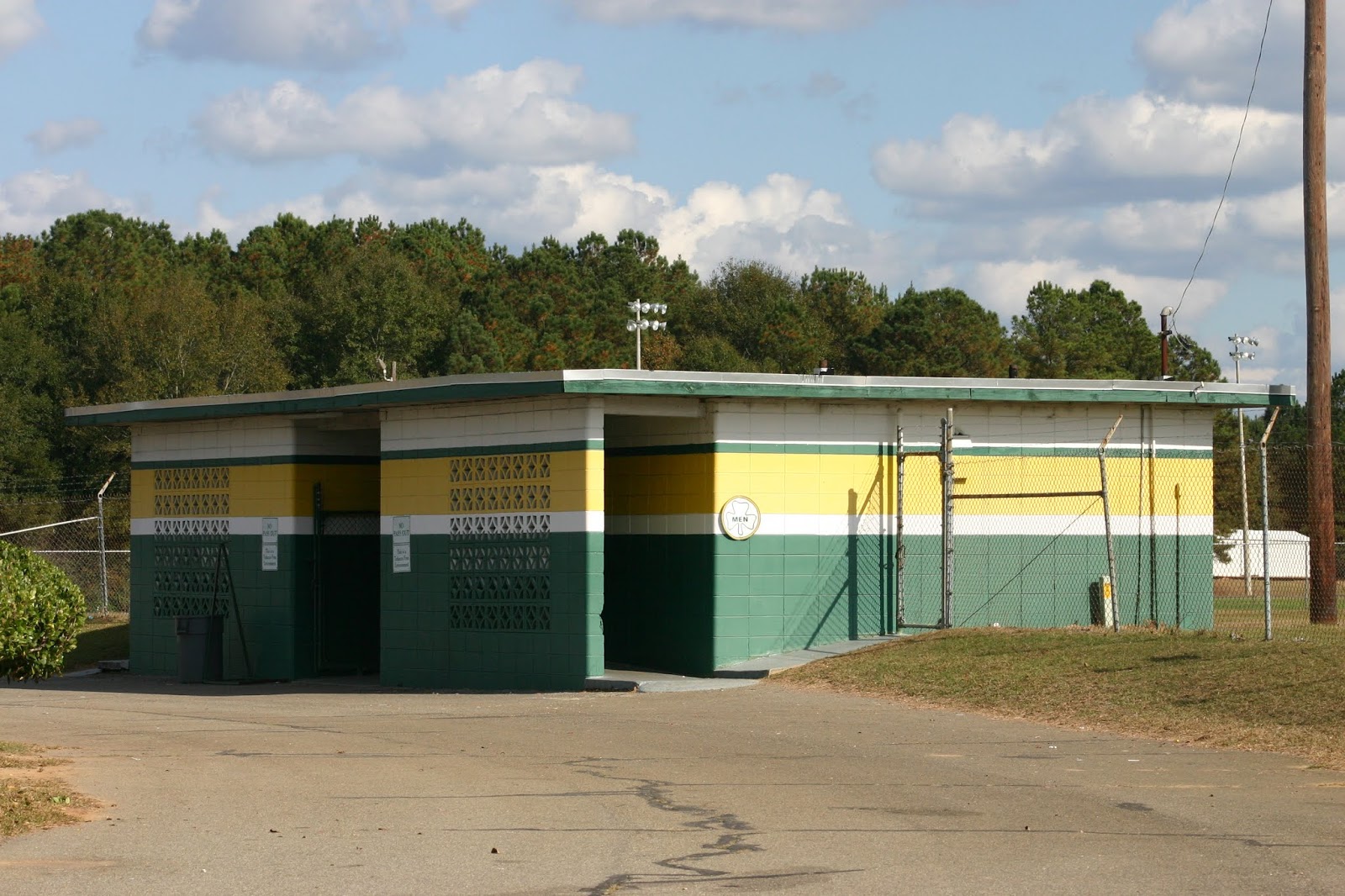 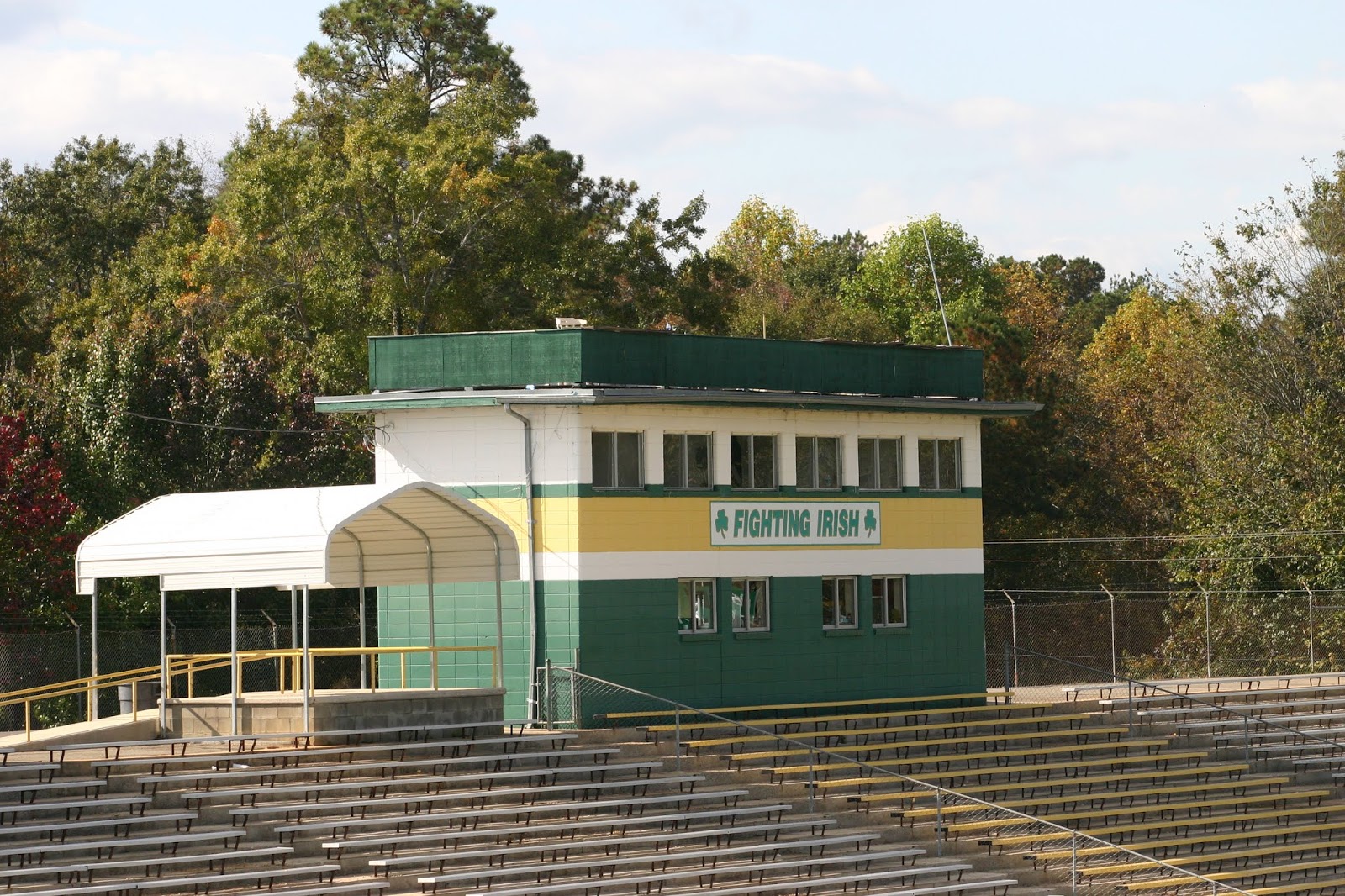 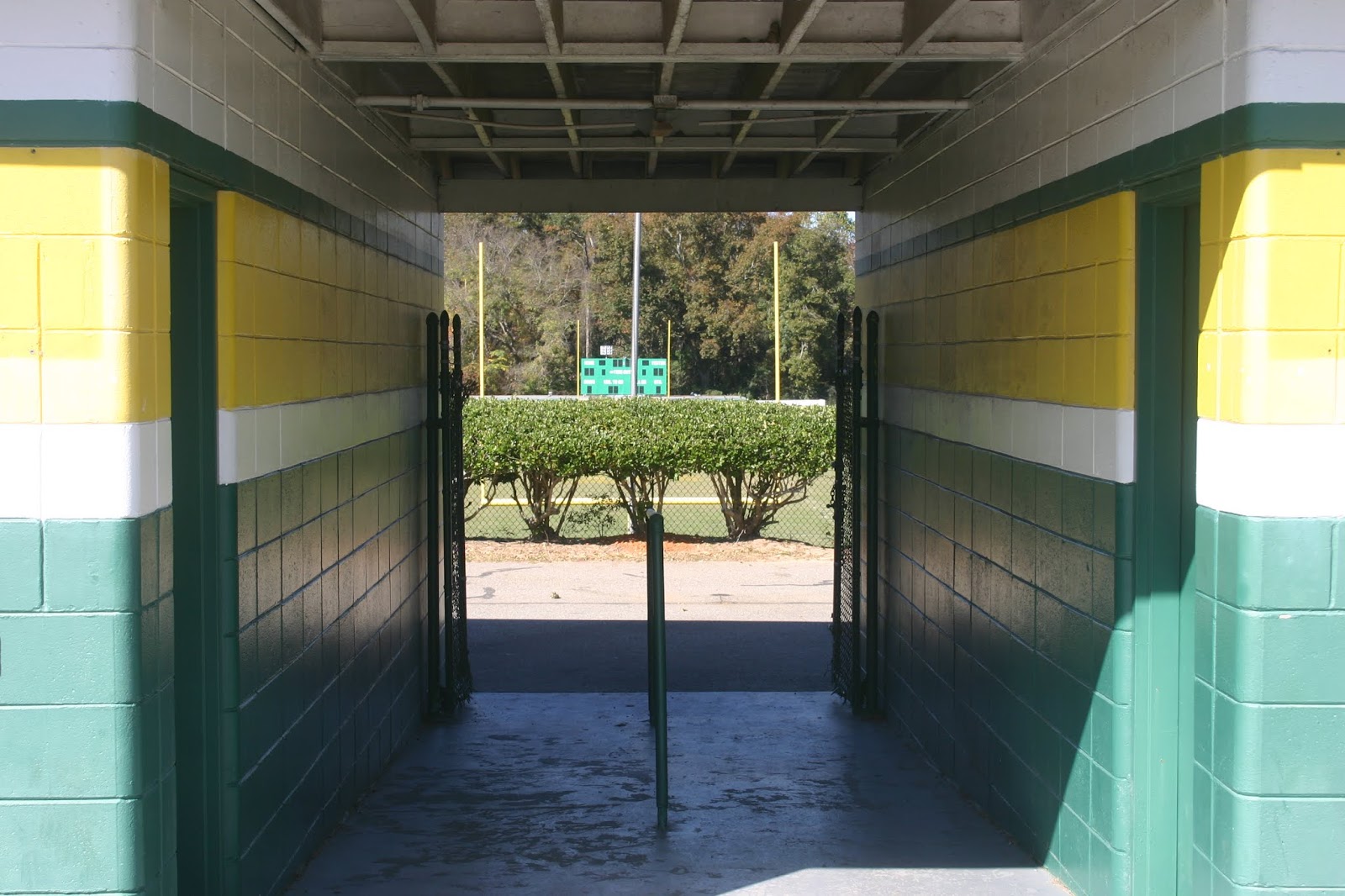 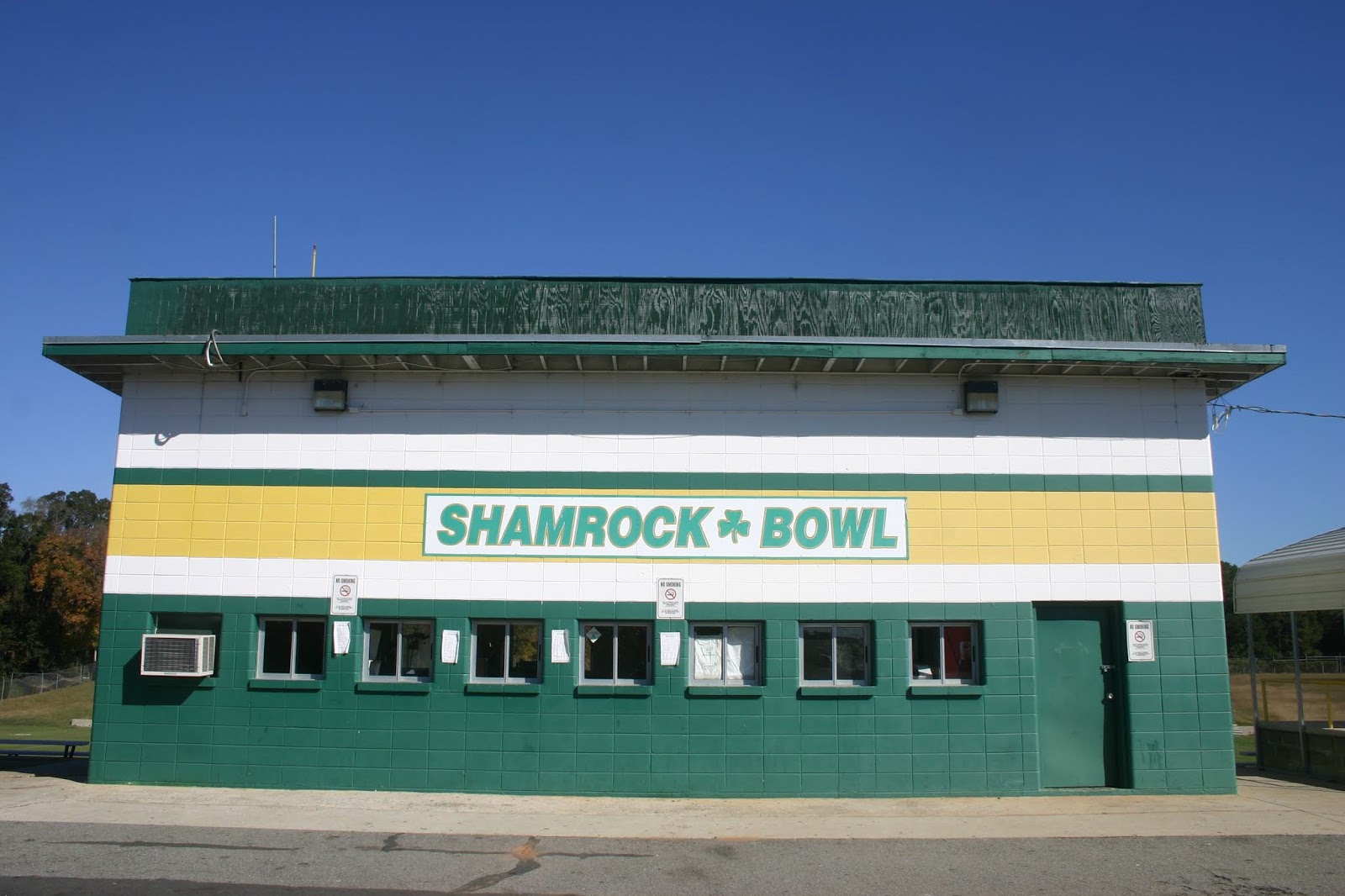 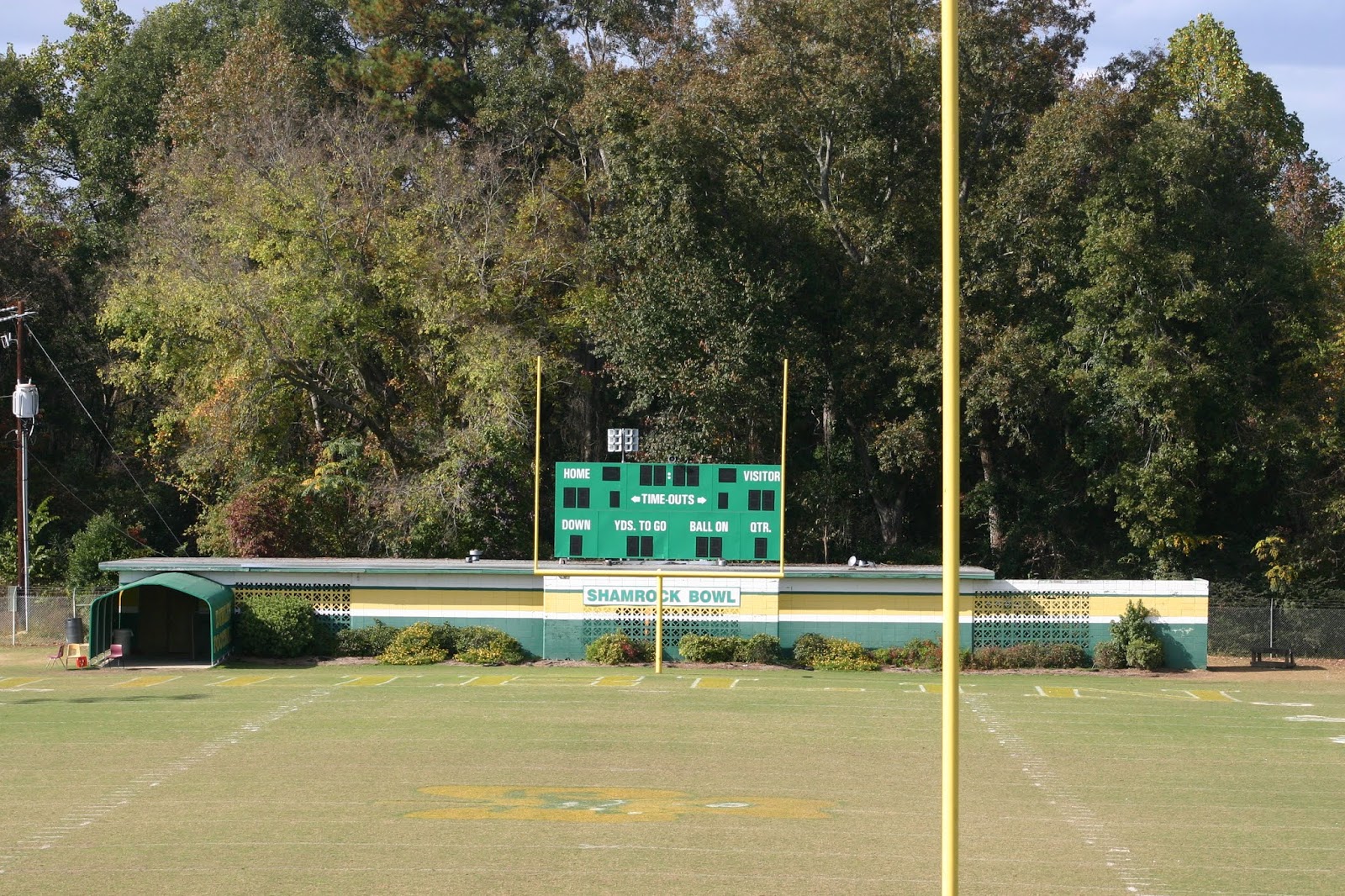 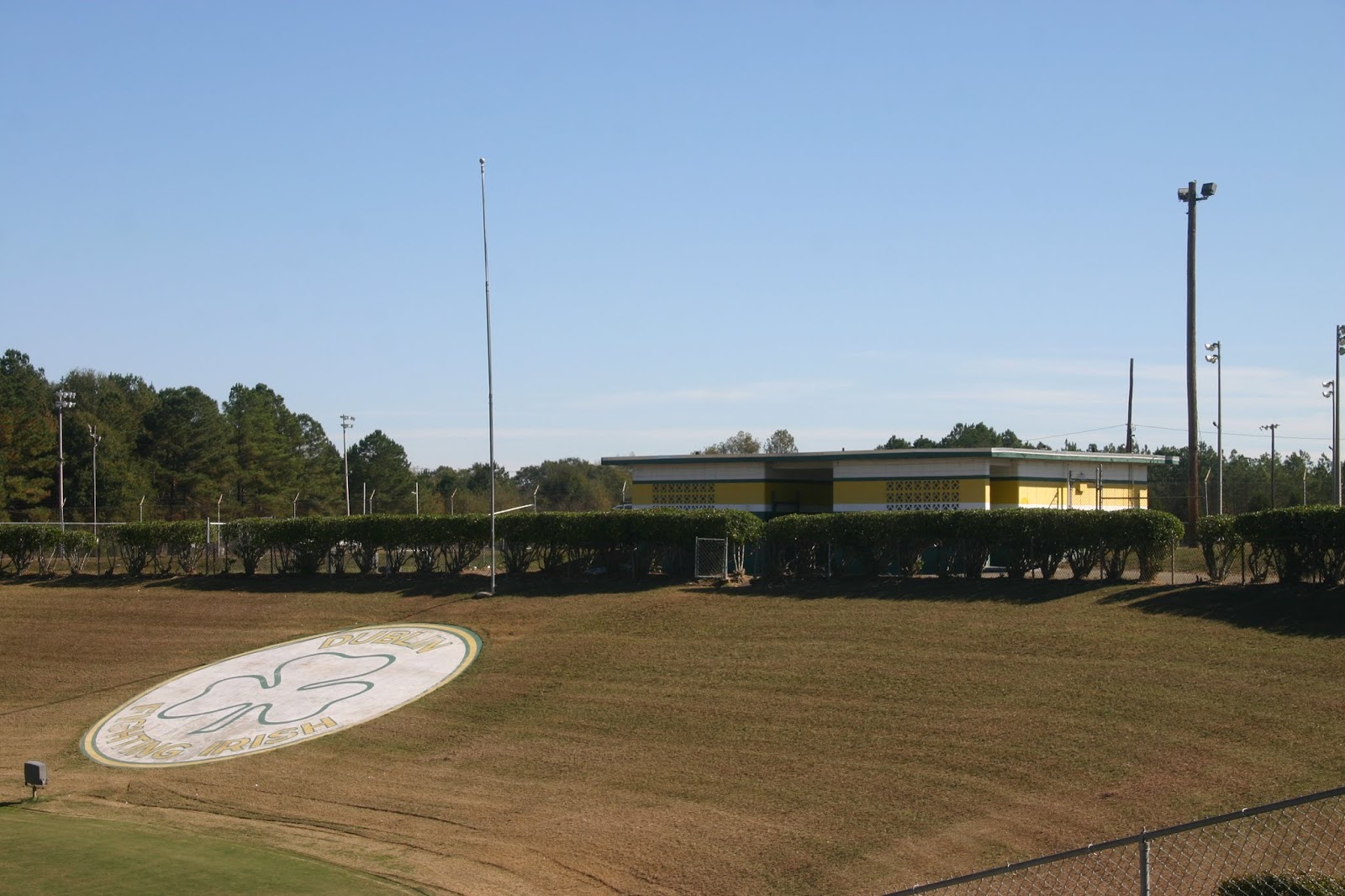 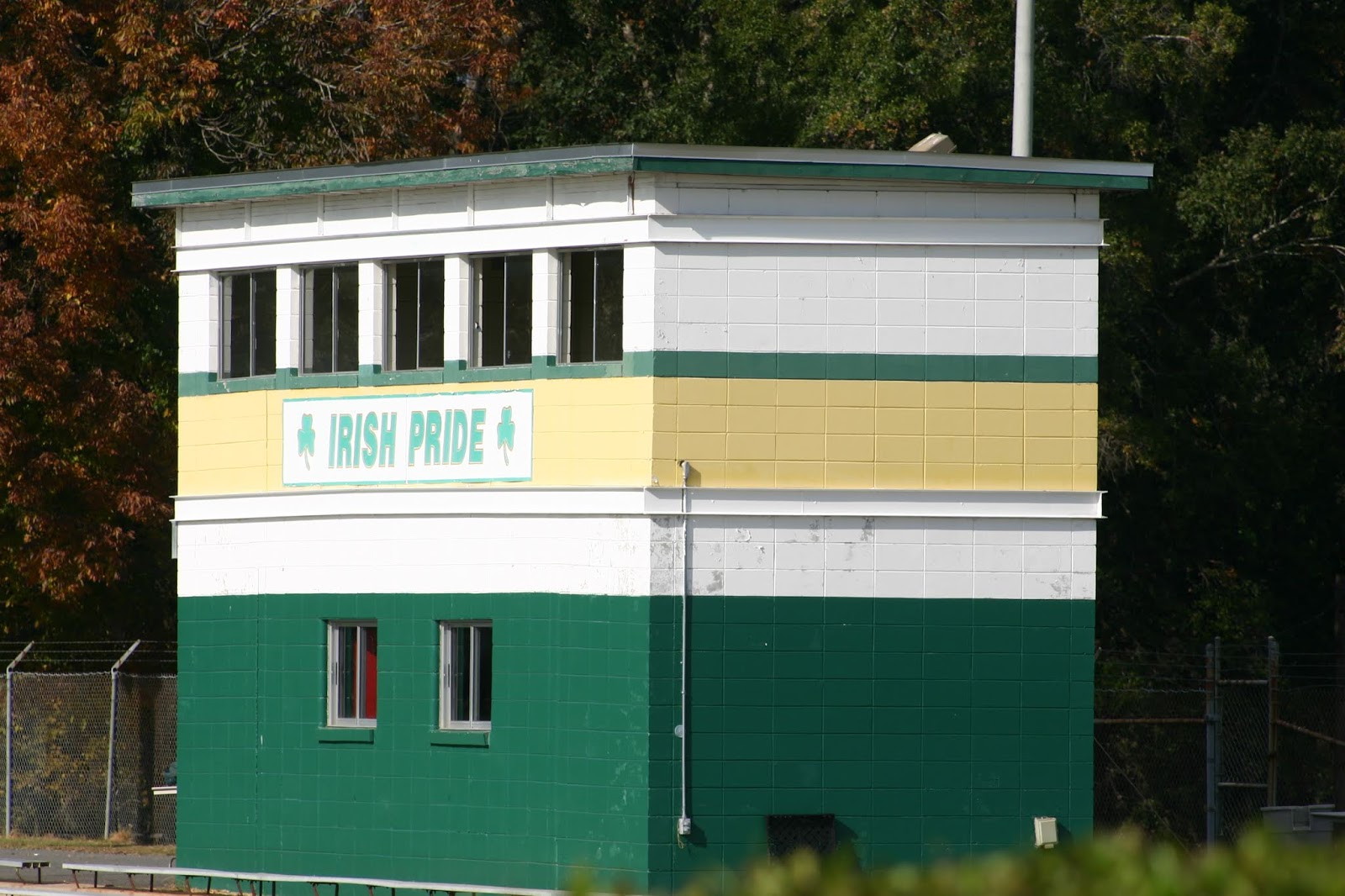 An open house was held on held on August 24 and 2600 people showed up to tour the field, meet the players, and listen to a concert by the Dixie Irish Band.  There was still $24,000 which still needed to be raised.  Lamb invited all comers to sign notes which could be paid back at 5, 10, or 15 dollars a month.

Opening night was set for September 21st.  The Irish were 3 and 0.  By opening night a little less than 16 thousand dollars was needed.  That Friday was officially designated as "Fill the Stadium Night."  The opponents were the Crisp County Rebels.  The chain grocery stores agreed to close a half hour early.  In the pre-game ceremonies, Sharon Lamb, a cheerleader and daughter of Don and Mildred Lamb, christened the stadium as she led the unveiling of the shamrock at the southern end of the field.  The Irish good luck symbol was originally fashioned out of neatly arranged Liriope plants.  The name for the new stadium was obvious - The Shamrock Bowl.   At least five thousand loyal fans passed through the gates. Crisp County, playing in a higher class, fought back to tie the game which ended with the score of 13 to 13.  The Irish finished the season 7-2-1.  Charles Faulk was an All-State tackle. 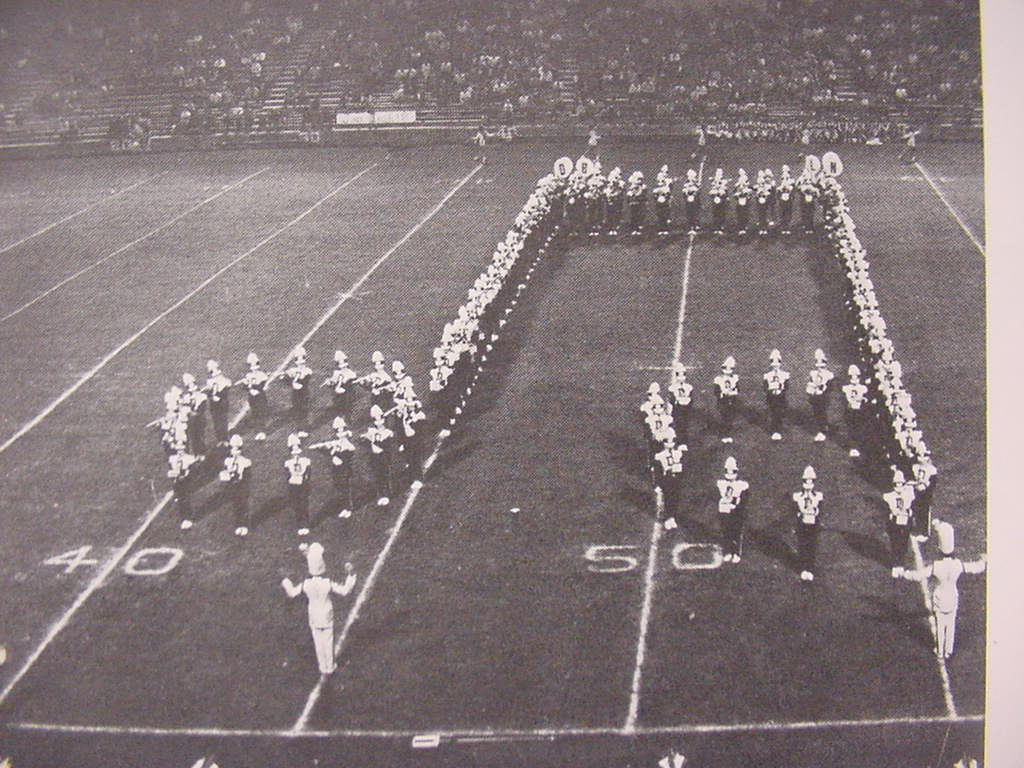 The Shamrock Bowl is now filled with fifty eight years of memories.  There was another state championship in 1963 and several great seasons after then.  The halftime fans of the 60s were the treated to the music of one of the finest high school bands ever under the direction of John Hambrick and Jim Willoughby.  Sylvester, our family beagle, still holds the record for a 120 yard touchdown run as he avoided capture by several winded chasers.  In 1974 Jeffrey Sims set a state record for return yardage on two consecutive plays  when he returned a kickoff 90 plus yards which followed a 90 yard plus interception return on the last play of the last game.  In 1976 an obscure freshman was playing in his first game away from home.  Not many knew the name of the back who lost four yards on two carries.  The young man never looked back and probably never had another negative yard game.  He of course was Heisman trophy winner and the all time great, Herschel Walker. 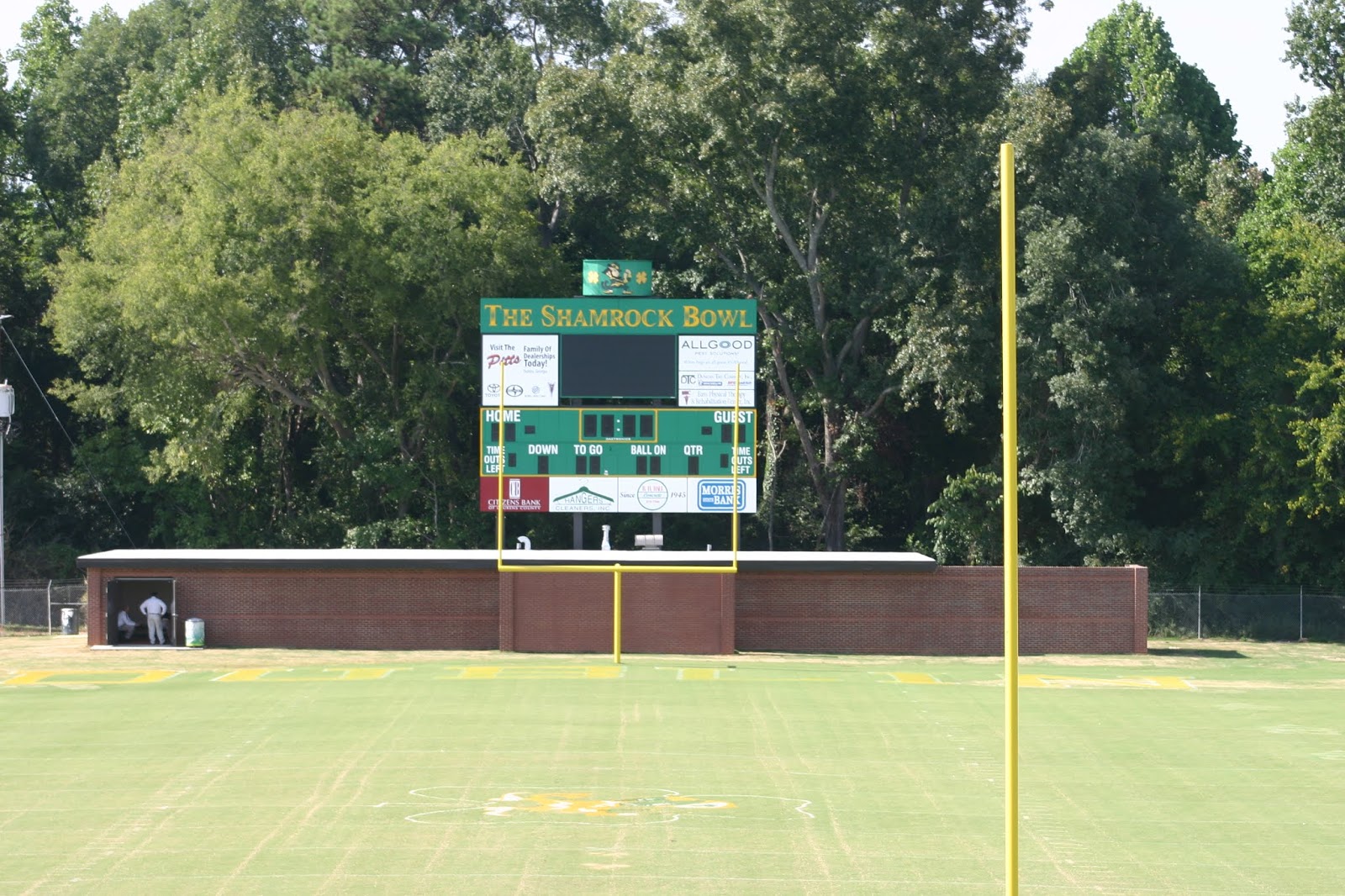 
One Friday night this Fall, when the air is cool and the moon is full, grab your seat cushion and head on out to the Shamrock Bowl.  Close your eyes, smell the popcorn and the grass slowly turning brown, and remember the magic of '62 when thousands of Dubliners came together and realized their dream of building one of the finest high school athletic fields in our state.  Sources: History of the Shamrock Bowl, by Don Lamb (Dublin-Laurens Museum).