PIECES OF OUR PAST - XAVIER WHIPPLE 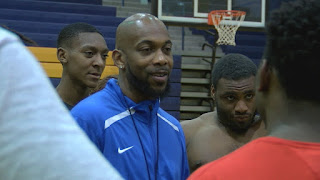 Xavier Whipple (left @WGXA)  has been placed on the throne of one of the greatest high school basketball dynasties in Georgia.  Two seasons ago,  he replaced Aaron Geter, whose Warrior teams have won seven state championships in the last two decades.  Whipple, a son of Andrew and Natalie Underwood and a native of Dublin, Ga, born there on Nov. 30, 1982.

Xavier grew up shooting a basketball toward a hoop wherever he could find one.  His father Andrew, a star player for the Wilco Warriors back in the mid-1970s, taught him how to shoot and shoot well. Whipple’s first known  appearance on a Dublin court came in 1994 when he participated in the annual Elk’s Club shooting contest.  Wearing his hero’s jersey, Whipple finished second to Trinity’s Cole Holliday.

After that Whipple began to play middle school and high school basketball for his beloved Warriors.  Under the tutelage of Coach Aaron Geter, Xavier made a rapid rise to become one of the best shooting guards in the State of Georgia. 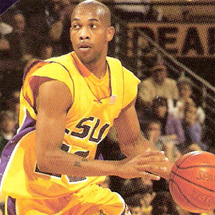 Whipple rose to prominence during his sophomore season.  In what has been one of the greatest high school games involving a Laurens County team, the 5th ranked Warriors faced the 10th ranked East Laurens Falcons in the state final in Macon.  The Warriors held off a furious late attack by the Falcons led by all state team player and game high scorer, James Cuyler, to win the school’s first championship, 61-52.     Whipple was honored that season by his being named one of the few  sophomores ever named to the first team AA all state team.  Morever, the 2nd year player was named as the Player of the Year in AA.

Each team had a lot of returning starters and sure enough the neighboring schools met again in the return match up 2000 AA Championship game.   In nearly a mirror image of the first game, the Warriors won again by nine points, 67-58.  And once again, an East Laurens player and all state player, Octavious  Williams, led all scorers with 25.  James Cuyler, who became the Falcon’s first All State First team player was held to an uncharacteristic low scoring game.   Whipple added his name to the first team all state AA for the second time.

As the 2000-2001 season was coming to an end, it was apparent that a “three-peat” was likely.  Whipple also starred on the football field.  In 2000,  he was named as the Georgia 2000 Player of the Year in Class AA Football.  As soon as football season was over Whipple  put on his basketball shoes, leading his team to another final four.

On the court, Xavier Whipple averaged 20.8 points per game, six rebounds, seven assists and three steals in his senior season.   The Warriors made it to one of the semi-final games against East Hall.  East Hall dominated the second quarter of the game and held on for the rest of the game with a four point lead to dash Whipple’s team of the third straight championship, 80-76.

At the end of his senior season, Xavier Whipple achieved a record which has been rarely matched in the state as a three-time, first team, all state player.  Whipple loved the atmosphere at Louisiana State University, whom he chose over many other suitors to resume his basketball career.  During the early months his rookie season, Whipple was named as the fifth best player in college basketball. 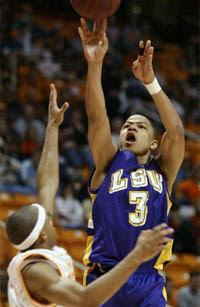 As a freshman, Xavier averaged 5.8 minutes in the 18 games he participated in as a freshman, averaging 0.8 points per game, and 0.7 rebounds and assists. His best game was against Southern University (Nov. 19) when he played 10 minutes, hitting all three of his field-goal attempts, including one from outside the three-point arc and both of his free throw attempts for a high of nine points. Whipple scored against Northwestern State (2 points, Dec. 2) and at Ole Miss (3 points, Jan. 23.)

In his second year, Whipple saw action in just seven games in just 33 minutes of playing time before being inserted for the final 11 minutes of the game at Alabama. He would start the remaining 13 games of the season, playing almost 290 minutes as LSU won nine of the 13 games. Whipple averaged 2.7 points per game for the season for the 22 games he played in, 1.2 rebounds and 1.9 assists per game, his average went up 1.4 points in the 13 games he started. In his starts, had four or more assists in six games, including six at Auburn and five against Mississippi State in the SEC Tournament. Xavier scored eight points at Tennessee, seven against Centenary. That season, Whipple hit  20-of-38 field goal attempts, including five three-pointers.

In one of his best seasons, the junior Whipple started 26 of 29 games this season (including 15-of-16 conference games), averaging just under 25 minutes a contest.  He averaged 4.1 points, 3.0 assists and 2.4 rebounds a game, along with 88 assists and 62 turnovers, it marked the fifth consecutive year the primary starting LSU point guard had more assists than turnovers at the end of the year. Against Troy State, he had his first career double figure scoring game with 11 points (4-of-8 FGs, including three treys)  His SEC high of nine this year came against Kentucky (2-29).  Whipple hit a dozen three pointers played in five games of five or more assists.

In his last season, Whipple came off the bench in all 30 games to average 18.9 minutes a game, averaging 2.1 points, 1.7 rebounds and 2.3 assists per game with an assist to turnover ratio of 2.2. He played over 20 minutes in 13 games this season.  Had six assists against McNeese State and at Arkansas  both games with just one turnover and had five assists on four occasions, Xavier hit 9-of-28 three-point field goals and  finished his career averaging 2.6 points and 1.6 rebounds with 209 total assists and just 132 turnovers.  During his four-year career, Xavier Whipple made 27 three pointers, played in 98 games in his career and started 39,  and appeared in a post-season tournament all four years. 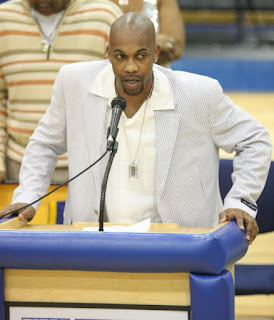 On basketball nights, you will see Xavier Whipple in the Palace at Wilkinson County High School After nine years as Coach Jeter’s assistant, the time came for Whipple to take over the reins in 2018.  And, just as the Warrior fans hoped, Whipple’s team made it to the final four in 2019.

“The main thing is giving back to the kids," Whipple says. "I think about it a lot," Xavier told a reporter for WGXA news.   Whipple told the reporter that he feels no pressure compared to some of the SEC games he played in where 20,000 fans were surrounding the court.

As of press time, Whipple’s Warriors are ranked seventh in Class AA and once again Whipple is on the cusp of another final four berth.  This time, as it was 20 years ago, another local team, the Treutlen County Vikings (24-0 and ranked first in the state,)  are an obstacle to his ninth state championship, two as a player, six as an assistant coach, and his first as a head coach.