The Emperor of Rock and Roll 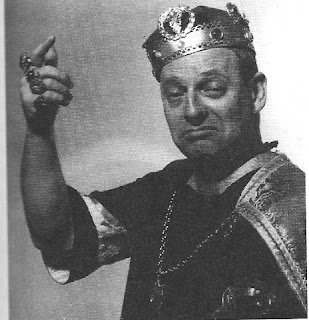 The story of Hal Murray begins in a hole in the wall shoe shop  in the Leitch Stubbs Building on West Jackson Street in Dublin, Georgia.  Hal, whose birth name was Herman Aronson,  was born in Dublin on October 20, 1920 to his Russian Jewish parents, Louis and Lena.  The Aronsons, like many other merchants in the first block of West Jackson Street during the hard times,  lived in or above their stores.  Their neighbors were the Jepeways and the Nashes  from Syria, the Gekas from Greece and the Kreutzes from Germany.

Murray went into the radio business in 1939.  While serving in the Army Signal Corps in World War II from 1942 to 1943, Hal wrote musical shows. He later appeared in off Broadway plays like Harvey, Born Yesterday, and The Seven Year Itch as well as night club acts and television shows.

Thousands of disc jockeys like Murray worked mornings, afternoons, evenings, nights,  weekdays and weekends sitting at a desk in a real radio station spinning records, cracking jokes, promoting their stations and themselves and selling almost everything.

Known to his listeners as “The Emperor,” Murray, always the clown, wore Emperor’s clothes at public appearances.  Others like Bob Hudson, Mike Pasternak, Doc Holiday and Clark Weber claimed the title of “Emperor” as well.

When he retired some after almost  forty years on the air,  Hal Murray was one of the most well known disc jockeys in the United States. In his career, Murray witnessed the drastic change from the swing music era to pop  to rock and roll and beyond.   The list of radio stations he worked in would almost complete an entire alphabet and cover the country from coast to coast.

Hal first appeared in archived newspapers as a radio host at WQAM and  WMIE in Miami from 1949-1951  and as a radio and television host on WKAT in Miami, Florida in the spring of 1952. Always one to put on a show, Hal once dove into a pool with a pair of porpoises which threw him around like a water polo ball, just to please a sponsor of his show.  Murray hosted a tv and radio show, which he dubbed, “The Murray Go ‘Round.”  Hal also hosted “Dixieland Matinee,” a coast to coast radio show on the Mutual Radio Network.

Murray left the warm winter weather of Miami in 1953 to host a three-hour morning show on WHKK in Akron, Ohio.  The following year after a brief stint at WLOS in Asheville, N.C., Murray packed his gear and moved to WEEK in Peoria, Illinois. It was in Peoria, Illinois, where Murray’s radio and tv show caught the eyes of NBC Radio executives, who asked him to fly to New York for an audition. 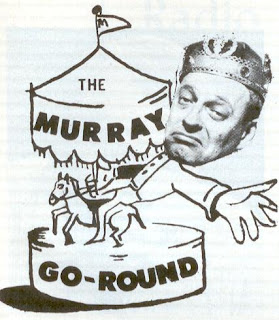 In 1955, Murray moved once again to WOKY in Milwaukee, where he also did two five-minute video shows on WXIX-TV.  The year 1956 took Hal Murray to WINN in Louisville, Kentucky, back to WMIE in Miami for a short time  and finally to WNOE in New
Orleans, where on the morning of July 10, Hal interviewed a rising rock and roll star, Elvis Presley. It was during that year of 1956, when Murray’s play list began to change to Top 40 forever with the explosion of rock and roll music on radio stations everywhere.

Murray left  WDSU-TV in New Orleans and went west to  KTSA in San Antonio in 1957 and KLIF in Dallas in 1958, where he aired his “Midnight Murray Go Round” show from midnight to six. Murray left Dallas in  1958 for  WVKO, in  Columbus. Ohio, where he did a show on a miniature merry-go-round on the roof of the Neil House Hotel.  He briefly returned to Texas when he worked at KILT in Houston. 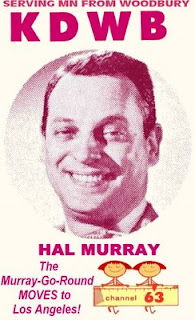 In the winter of 1960, Hal Murray moved yet again, to KDWB in Minneapolis, Minnesota, where he would remain for four years, except for a temporary stint in San Bernadino, California on KFWB. No longer a one-year man, Murray moved to Pittsburgh’s KQV, where he would enjoy his greatest success.  First appearing on the morning show, the former “Mr. Twin Cities,” drew the endearing affection of his large audiences with his vaudeville one-liner jokes.  Murray moved to mid days in 1965.  One of the station’s biggest shows came during the Christmas show, which featured Roy Orbison, The Four Seasons and Bobby Rydell.   Pictured left with Fabian. 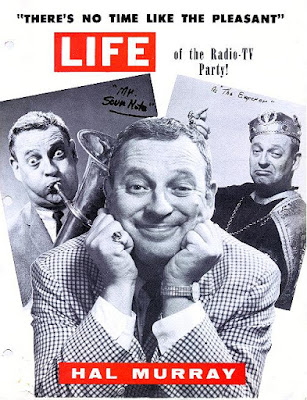 Known as “Emperor Murray,” Hal donned a cape and carried a scepter while he was introducing the biggest acts of the day including the Beatles, the Rolling Stones and the Monkees.  His corps of listeners dubbed themselves “Murray’s Militia.”  To promote his show, Hal used voices from his fellow disc jockeys at KLRA in Los Angeles, including a young Casey Kasem, who appeared as “Lt. Cavendish.”

"I don't pretend that it's not corn.  That's how I get away with it. Otherwise, I'd be in trouble.  I need a lot of corn to go with my 28 hours air time a week,” Murray told Vince Leonard of the Pittsburgh Press in a 1964 interview.

The claim that disc jockeys play only the records they want to was termed "absolutely false" by Murray. "We have our finger on the pulse of the public. We give them 'contemporary sound, what they want to hear," Murray proclaimed.

Those promoting Murray wrote, “What a guy!  What a talent!  What a bundle of energy!  He's the most enthusiastic fellow we've ever seen hit this market.  Work? He never stops.  He took to the KQV mikes on February 17th, and he's been on the go ever since. The
Press calls him KQV's zany new morning man ... ‘he pours corn with his coffee.’  The TV-Radio Digest says .... ‘Murray's show is a much needed additive to the area - his gags quick and funny - he works relaxed and enjoys it.’"

Among Hal’s wildest gags was the time he was pictured talking to a worm inside an apple and when he was preparing to  drive a nail in his head. 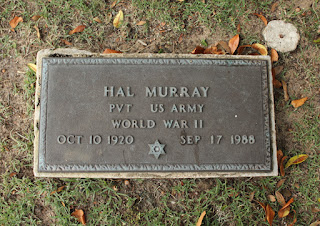 Murray passed away September 17, 1988 at the age of 67.  Murray’s body lies in a simple grave in the Greenwood Cemetery in Eustis, Florida.  His  faded bronze marker designates him only as a private in the U.S. Army in World War II.    There was no room to tell those who visit his grave that he was an Emperor of Rock and Roll.

Fred Walter said…
Hal was the BEST disc jockey on KQV. I listened to him quite often, and I also watched him on several occasions in the studio window at 7th and Smithfield Streets. I missed him when he left for Tampa Fl. in 1967 I was fortunate to hear is farewell broadcast at the time. I was glad to find out he returned for a short time in 1975. In 1979 I got married and my wife and me went to Disney World in June of that year for our honeymoon. We had the car radio on in Orlando and Hal was on WLBE, we were fortunate to listen to him while we were down there. That was the last time I got to listen to Hal. I never got a chance to meet him but he seemed like a very personable guy.

Unknown said…
Thank you for this wonderful profile of Hal Murray. He was one of the most entertaining personalities on KQV, Pittsburgh's most entertaining radio station. I had the chance to meet and talk with him at an appearance he made during his return to KQV in 1975. He was delighted to find himself so warmly remembered in the city. Unfortunately, his second time in Pittsburgh lasted only a few months before KQV cleaned house and changed to an all-news format.