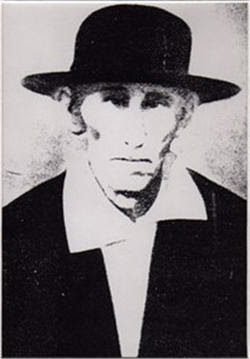 Henry Crawford Tucker, Jr. was born in Laurens County, Georgia on May 5, 1805, some two hundred and seventeen years ago to Henry Crawford Tucker Sr., and Sarah "Sallie" Hunter. In 1824, Tucker married Nancy Sapp in neighboring Montgomery County. They had eight children before her death in 1841. About 1825 he moved his growing family to Irwin County.
It has been said that Tucker took a trip to the present city of Tallahassee, Florida, where he was the first white man to erect a house in the early 1820s.  The legend states that Tucker built his log cabin home on the hill where the Florida State Capitol now stands.
Tucker, at the age of 31, joined the Georgia Militia in 1836 and engaged in the war against the native American forces in Southwestern Georgia and Alabama. He was elected captain of his company and served with distinction.  Like many Central Georgian families, the Tuckers moved on to Southwest Georgia, eventually to Colquitt County.
On 10 May 1842 he married Margaret "Peggy" Watson in Thomas County. They had eleven children before she died in 1856. The next year he married Rebecca Bryant on 9 February 1857.  He and his third wife had 13 children. Henry Crawford Tucker, Jr., died on 2 February 1863 and is buried at Bridge Creek Cemetery in Colquitt County, Georgia.
Rev. Tucker formed and served as pastor of Sardis Church in 1840." He was married three times and had 32 children. Nancy Sapp, whom he married in 1824 and who was the mother of the eight oldest children; Margaret Watson, whom he married in 1842 and who gave birth to 11 children; and Rebecca Bryant, his third wife, whom he married in 1857 and who was the mother of 13 children. 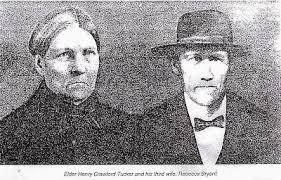 In 1860, the State of Georgia held a convention in Milledgeville to once and for all decide whether or not to secede from the Union. In 1861, Henry Tucker was one of two representatives from Colquitt County to the Georgia Secession Convention Representative voted in the affirmative.
Tucker’s  feelings toward leaving the Union were contained in Robert Dennard :Tucker's book, William Tucker of Throwleigh, Devon, on page 70:
"Livestock being more important to south Georgia than cotton, there were far fewer requirements for slave holdings and fewer concerns among its citizens regarding the prohibitive tariffs and cotton trade restrictions being imposed by the northern states through their representatives in Congress.”
“Local sentiment strongly favored remaining in the Union. Rev. Tucker left home inclined to vote accordingly. At the convention, however, he was swayed by the majority and ultimately voted for Georgia to secede from the United States of America. Once committed, his family and neighbors fully supported the cause. Five of his sons fought for the Confederacy. Three served in Company H, 50th Georgia Infantry -- John as an officer, Henry as a sergeant, and Richard as a private. George  served in Company C, 11th Georgia Cavalry, and Matthew fought with Company G, 12th Georgia Infantry. Henry was a fatality and Richard was severely wounded."
His descendants remembered that he was not a handsome man, which he equalized with his “sparkling, blue eyes, and a very charming personality.”
“ Wherever he went, people crowded around, for he was such a pleasure to listen to and talk with,” said some of his relatives.
Rev. Tucker’s land in Irwin County where Tucker made his home was annexed into Thomas County when that new county was created.  The preacher’s holdings continued to grow into a couple of  thousands of acres.
The large double-pen log house that he had built many years earlier was quickly outgrown. He had a total of 18 sons and 14 daughters. Rev. Tucker, added on to his substantial home by adding a dormitory for his children who were attending school.
The Henry Crawford Tucker Log House and Farmstead is located on a tract containing 45 acres  near Moultrie, Georgia at the end of a long dirt road, about halfway between Funston and Moultrie, in Colquitt County, Georgia. It was listed on the National Register of Historic Places in 1982.
The house, built in around 1830, is a one-story dog-trot log house with additional shed porches and enclosed porch rooms. Its main part is built of hand-hewn logs with dove-tail notching.
In 1883 , Henry Crawford Tucker, in his late seventies, was on his way into Moultrie, Georgia.  His  horse was spooked. Tucker was ejected from his trusty buggy and was caught in a wheel.    Rev. Tucker did not live long.  He died on February 2nd.  His body was buried in Bridge Creek Cemetery before a large crowd of family members, friends, and mourners. When his widow Rebecca Tucker in 1909, she was laid by his side. 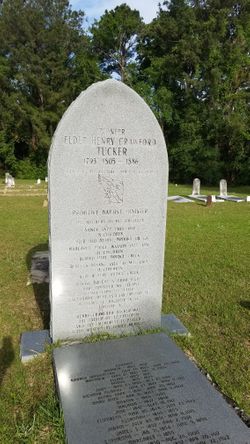 Today, his thousands of descendants can be found living across the Southeast and the rest of our nation.