WE DIDN'T HAVE ANYTHING ELSE TO DO

SO WE CLIMBED A TREE AND STAYED THERE
It was a time when people ate goldfish, danced for days at a time, and sat in trees for weeks at a time - for no good reason at all.   In Atlanta, Charles Preston and Bratton Davies were trying to set a record for most holes of miniature golf played in a weekend.  In Arizona, Larry Peters was seeking an endurance record for sitting on a cactus. Ouch!  In New Jersey, Jack Evans set a record for lying in a coffin, only to find that the promoters wouldn't let him  be removed from the ground until they got their cut of the deal.  They called them fads, many of them disappeared as fast as they came.  It was the first summer of the Great Depression, although Laurens County had been in a depression since the Great War.  The fad of tree sitting struck the kids of Dublin in the mid summer of 1930.  Within two weeks the fad was over and everything was back to normal. 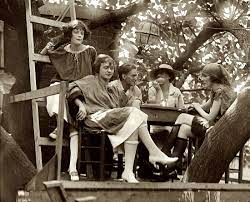 Standing in front of the Jordan home on North Franklin Street was a tall walnut tree, perfect for climbing and perfect for a tree house.  Wickes Jordan and Gordon Cartee II had heard about people sitting in trees for days, even weeks at a time. The boys knew they could do it too.  After all, school didn't start until September.  During the day of July 17th, Gordon and Wickes carefully worked out every detail of their plans.  The boys found some old boards and carried them up into the tree, where they used their father's hammers and nails to construct their perch.  They knew that if would be getting dark soon, so an electric light was installed - the cord running down to a plug inside the house.  In their haste, the two tree sitters forgot about the enemy of all of their ilk, rain. Mercifully, it was only a slow drizzle and not a thunderstorm,  which might have sent deadly bolts of lightning into their nest.  A few kids sent up a cover, some food, and some drinks with the aid of a rope and a well windlass.  After supper, Wickes and Gordon decided to play a game of checkers to stay awake.  Gordon was the first to succumb to the sandman.  Wickes was a little bored and perhaps a little afraid, probably because he was nine years old and had never slept in a tree before.
Wickes climbed down and headed for his cozy bed in his home across the street. Suddenly, Gordon heard a thud.  Gordon's first thought, much to his horror, was that his buddy had fallen out of the tree.  Gordon called out.  There was no answer.  Gordon called out again - still no answer.  Gordon, petrified at thought of what he thought just happened,  hurried down from his perch to look for a body.  There wasn't one.  The Jordans relieved Gordon's anxiety when they told him what had happened.  The adventure ended after only four hours.  Gordon promised to return to the tree the next night. 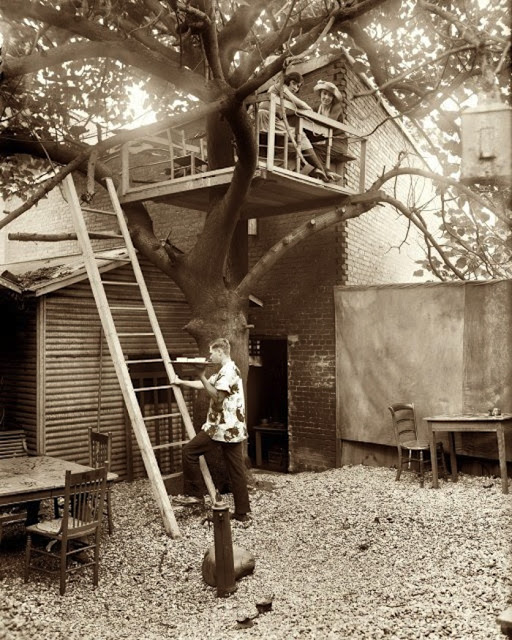 Word was spreading.  New climbers were going up every day.  Gordon and his friend Hoke Overstreet went back up on Friday night. Wickes had been booted from the team for leaving his post.  Rufus L. Tindol, who lived up the street at 1102 N. Franklin, went up solo into a china berry tree in his front yard determined to outlast his two friends who had started two days earlier.  On the south side of town, Charles Dominy, 14, and Rudine Fort, 15, made their way up into the large water oak at their home at 411 Pine Street.  Their avowed purpose was to stay up until school started.  Vivian Fort and Roy Wilson offered their services as a ground crew.  Mrs. Fort figured the boys needed to do something useful, so she put them to work shelling a basket of butter beans for their supper on the first night.
Tree climbing wasn't just for boys. Evelyn Fitchett, her sister Helen, and their friend, Camille Proctor were the next crew to go up.  Proctor announced to the whole North Franklin Street neighborhood that the girls would begin their quest for the record at 8:00 p.m. on the 22nd in a tree in front of the Fitchett home at 501 North Franklin Street.
Gordon and Hoke were going strong after four days.  Rufus experienced a slight problem when he brought up too much ice cream.  The mothers of the participants were worried.  City physician Dr. A.T. Coleman stated that in his medical opinion, "tree sitting might prove to a great strain on the nervous systems of the children; not to mention the mothers.  When Mrs. Tindol read Dr. Coleman's statement in the newspaper, she pulled the plug on Rufus's stay at one hundred hours. 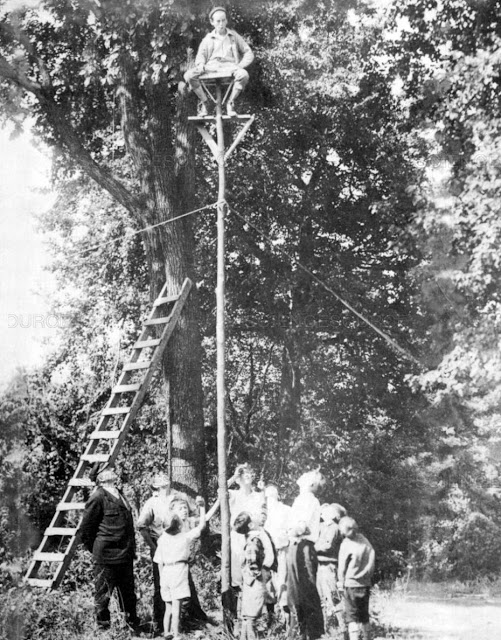 The Fitchett girls delayed their endeavor until the morning of the 24th of July.  Camille Proctor didn't go up for an undisclosed reason.  The girls had somewhat of an advantage over their male counterparts.  Mr. Fitchett built them a regular tree house, equipped with such amenities as lights, water, beds, an electric stove, and a front porch.  Helen, the younger sister, came down after a short stint. She went back up again, oblivious to the fact that her own streak had been broken.
Ellison Pritchett and Charles Molony developed a wild scheme.  They hired their own attorney, W.W. Larsen, Jr., and their own personal manager, Steve Fuller.  Pritchett, an aviation enthusiast, theorized that the refueling process could be made much easier by aerially sending supplies from a plane piloted by Frank Elmore.  Pritchett had just returned from a flight to Atlanta in Elmore's plane, making Pritchett the first Dublin man to take an airplane ride to another city.
On the evening of  Cartee and Overstreet's 8th day, a high wind whirled through the branches of the walnut tree on North Franklin Street.  When a branch was knocked off the trunk of a nearby tree, Gordon and Hoke decided it was time to call it quits.  The boys ended their try at exactly nine days and were leading the race.  The Fitchett girls had already conceded defeat.   The wind wasn't quite as bad down on Pine Street, so Charles and Rudine stayed up in their tree. They stayed up for nearly ten days, falling two hours and forty minutes short of the milestone.  The streak ended when a powerful electrical storm came up just before dark.  The boys were taken to Claxton Hospital, where their aunt, Annie Hardaway, the superintendent of nurses, gave them a checkup and a cash reward for a job well done.  No kid tried tree sitting again.  Their mothers wouldn't allow it.  Fort and Dominy's record was safe. However,  Judge J.S. Adams's tabby cat stayed up for seven days without food or drink,  fearing that the dog who had chased it into the tree was still waiting for its supper.

BRIGHTON CAVAPOOS, LLC said…
Appreciate the time and effort you put into this article friend. In our own way, we'd like to share love by offering your readers Cavapoo puppies for sale to add some love and light into their lives. Will definitely bookmark to come back for more amazing content.
June 7, 2022 at 12:23 AM

Mahi Agarwal said…
I’ve been browsing online more than 3 hours today, yet I never found any interesting article like yours. It’s pretty worth enough for me. In my opinion, if all webmasters and bloggers made good content as you did, the internet will be much more useful than ever before.